This Cinnamon Bundt Cake recipe is soft and moist, delightfully fluffy, and perfectly spiced with warm and cozy cinnamon. This cake is basically a cinnamon roll but baked as a bundt, topped with a sugary cinnamon glaze!

Bundt cakes are one of my favorite types of cake to make because they have a design built right in and you don’t have to worry about decorating them. As a trained pastry chef I like to work smarter and not harder, so a bundt cake is always at the top of my list.

This cinnamon bundt cake is super fluffy yet moist, and has that warm cinnamon flavor all over. It’s a perfect cake to make for the holidays but really can be made year round for that holiday feel.

The cake is iced with an easy to make spiced glaze that takes this cake over top! First things first you will want to know how to bake and get a bundt cake out of the pan . Follow the tips in that post to make the perfect bundt cake!

WHY YOU SHOULD MAKE THIS RECIPE

Mix wet ingredients: In the bowl of a stand mixer fitted with the paddle attachment (you can also use a hand mixer), mix the butter and sugar on medium-low speed for 2 minutes, then add the vegetable oil and mix until combined. Next, add the eggs, one at a time, mixing on medium speed in between each.

Bake: Pour the batter into a bundt cake pan greased generously with baking spray, and bake in your preheated oven until the cake is set and the sides pull away from the pan (45-50 minutes).

Cool: Cool in the pan for 15-30 minutes, then turn the cake out over a cooling rack to finish cooling before topping with glaze.

Glaze and serve: For the glaze, stir the confectioner’s sugar with cinnamon and cream in a small bowl. Mix until a smooth glaze forms, then pour over the cake, letting it drip down the sides. Enjoy!

Storing: This cinnamon bundt cake is best kept in an airtight container at room temperature for 3-4 days or wrapped tightly in plastic in the fridge for up to 1 week.

Freezing: Double up on the recipe and freeze a bundt cake for later or freeze in individual slices. Wrap tightly with plastic or keep in a freezer bag and freeze for up to three months. Let thaw at room temperature before serving.

What can I use instead of buttermilk in a bundt cake?

In a pinch, you can make a buttermilk substitution by mixing one tablespoon of white vinegar or lemon juice into whole milk or coconut milk and letting it sit for 5-10 minutes.

Can I bake this cake in a different pan?

Yes! You can bake the batter in a standard cake pan, loaf pans, pie pans, etc., but you’ll need to adjust the baking time accordingly.

Yup! Fill each flute in a mini bunt cake pan a third of the way from the top, and bake for about half the time.

This cake is divine alongside strong, freshly brewed coffee or tea. Here are a few ways to enhance your cake: 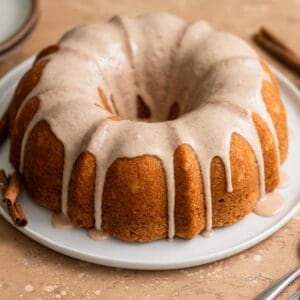 Make sure to read all about how to bake and get a bundt cake out of a pan.

Yep, just over here still shooting cupcakes. If yo

Just a reminder that your work has to suck before

Truth 💣: Manual mode is confusing! If its tak

Behind the scenes from start to finish of these wh

Just here doing my weird stuff 😂 Check out my