These cinnamon rolls have no yeast and are made using Athens Foods phyllo dough for the ultimate phyllo dough dessert recipe! The filling is made with brown sugar, butter, and cinnamon, and then the dough is rolled up in the shape of a cinnamon roll. They are baked in a cast iron skillet then drizzled with cream cheese frosting.

I am honored to have this post sponsored by Athens Foods, thank you!

What I love about this recipe is that it is EXTRA crispy and has so much flavor in every single bite. The buttery sweet filling is lined between each sheet of phyllo dough and then rolled up to look like a cinnamon bun.

As a trained pastry chef I love coming up with fun and inventive new recipes. This phyllo dough recipe definitely hits the spot just like this Strawberry cheesecake and this Napoleon dessert, made with Athens phyllo dough too!

If you have been looking for a new fun phyllo dough recipe to try that won’t take you hours to make, this is it!

What is phyllo dough?

Phyllo dough is a paper thin unleavened dough that is used to make sweet and savory pastries. Some people get it confused with puff pastry but it is not the same thing!

What is the difference between phyllo dough and puff pastry?

The difference between phyllo dough and puff pastry is that phyllo dough does not contain butter and is much thinner than puff pastry. It will not puff up in the oven the way puff pastry does. Puff pastry is a laminated dough, so when it is baked the steam from the layers of dough make it puff up. Phyllo dough stays in its paper thin state and gets very crispy instead. This is why you have to use many sheets of phyllo dough versus only using one for puff pastry.

How to work with Phyllo dough

Why you should make this recipe

For equipment, you will need an 8” cast iron skillet for this recipe. If you don’t have one, you can make this in a round 8” cake pan or an oven safe skillet.

How to make this Cinnamon Roll Phyllo Dough Recipe

Defrost the phyllo dough: Make sure that your phyllo dough is at room temperature. This is crucial! The dough will crack too much if it is still even a little bit frozen. Preheat the oven to 375° F and grease an 8” cast iron skillet.

Make the filling: Melt the butter, brown sugar, and cinnamon on low heat until melted. Make sure to watch it so that it doesn’t boil- otherwise it will harden.

Roll the phyllo dough: Unwrap the dough and keep a damp paper towel over the sheets when not in use. Brush 5 layers of dough with the butter mixture, then roll into a log. Roll the log into itself to make it look like a cinnamon roll and place into the cast iron skillet.

Repeat: Repeat the process until you have 7 cinnamon rolls.

Bake: Bake for 20-25 minutes or until the edges are crisp and golden.

This recipe is best made and enjoyed the day of but will also be ok the next day. Store it on your counter covered tightly in plastic wrap.

Freezing: I do not recommend storing it in the fridge or freezing this recipe.

How many sheets of phyllo dough should I use? For this recipe you will use 1 1/2 packages of Athen’s Phyllo Dough. Each pack has about 18 sheets per package. So you will use about 27 sheets total.

What can I make with leftover phyllo? You can make mini chocolate tarts! Cut the remaining sheets in half and spray a muffin tin with baking spray. Press 5-6 layers of phyllo into the muffin tin and spray with baking spray in between. Drop some chocolate chips in the middle and cover with 3-4 more sheets. Bake for 15-20 mins on 350° F. 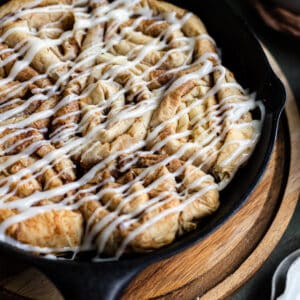 For the phyllo buns

For the cream cheese glaze

There are 2 packages of phyllo in each box of phyllo dough. You will need 1 1/2 packages phyllo dough for an 8″ skillet. If you only have a 10″ skillet you will use all of both packages within the box.

Yep, just over here still shooting cupcakes. If yo

Just a reminder that your work has to suck before

Truth 💣: Manual mode is confusing! If its tak

Behind the scenes from start to finish of these wh

Just here doing my weird stuff 😂 Check out my