3 Ingredient Russian Buttercream is a delicious and creamy alternative to traditional buttercream and is made with no powdered sugar! All it takes are 3 simple ingredients and a few minutes! Spread it on cakes, cupcakes, or your favorite dessert!

Buttercream frosting is a staple in lots of dessert recipes. It gives that sweet and creamy finish that takes a cake or cupcake over the top! In pastry school, we learned how to make various types of homemade frosting, icings, glazes, and buttercream, including this easy Russian buttercream recipe.

What Is Russian Buttercream?

This specific type of buttercream is used to frost many Eastern European desserts. Instead of traditional buttercream ingredients such as powdered sugar, butter, and milk, Russian buttercream uses sweetened condensed milk, butter, and vanilla extract. That’s it!

The frosting is less sweet than traditional vanilla buttercream frosting and is silkier and smooth like Swiss meringue buttercream. It has a light caramel flavor that’s delicious! It won’t crust because it has no powdered sugar, but it definitely works as a frosting to cover cakes and cupcakes. You can even pipe with it or use it under a fondant cake.

WHY YOU SHOULD MAKE THIS RECIPE

HOW TO MAKE RUSSIAN BUTTERCREAM

Prepare the butter: The butter needs to be at room temperature to make this buttercream. Not melted, but not too cold.

Cream the butter: In the bowl of a stand mixer fitted with the whisk attachment, cream the butter on high speed for a total of 5-7 minutes until it is white in color and fluffy. Scrape down the bowl if you see some of the butter not getting whipped throughout.

Mix and store: Mix on medium speed for another 30 seconds until it’s all combined. Add to a piping bag or a container. Use immediately or store in the fridge.

The temperature of butter: The butter needs to be at room temperature. Room temperature is when the butter is still firm but can make a light indent when you press into it. It should not be completely softened or greasy. Learn how to soften butter quickly to get it the perfect texture. This is a crucial step!

Using different extracts: Vanilla is a great choice for this buttercream because it compliments the sweetness of the condensed milk. But you can use any extract that you like! Consider almond, coconut, lemon, or orange.

Once completed, this buttercream can be left outside of the fridge for a few hours. This is best if you need it softer to frost desserts immediately.

After a few hours, it must be stored in the fridge in an airtight container. When you’re ready to use it again, let it sit on the counter until it reaches room temperature, or re-whip it in the mixer for a few seconds.

You can also freeze Russian buttercream! Place it in a freezer-safe airtight container for up to 2 months. Thaw overnight in the fridge and then re-whip for a few seconds before using.

What should I do if the buttercream separates?

If the buttercream starts to look like it’s separating, cool the bowl in the fridge, then add a little bit of sweetened condensed milk (1 teaspoon at a time) to help bring it back together. Whip it again for 30 seconds.

Can I make this buttercream ahead of time?

You can make Russian buttercream 1-2 days in advance. Store in an airtight container in the fridge until ready to use.

Can I add food coloring?

Yes! You can absolutely add food coloring to this buttercream to make it any color you like.

This special frosting without powdered suga can be used on many different desserts. Try our favorites below! 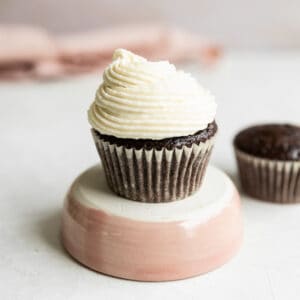