This challah recipe showcases a 6 strand braid with a sweet cinnamon sugar topping. With a video tutorial and an easy recipe to follow, you can skip the trip to the bakery and make your own!

Have you ever felt intimidated by braiding challah? Or feel personally victimized by a yeast dough recipe? I can’t tell you how many times people tell me they are afraid of making a recipe because it requires yeast.

I’m here to tell you that it is not that scary and that you, yes you, can do it.

It makes one large loaf which means it does not require a whole entire 5 lb bag of flour like some other recipes do.

I’m using Bob’s Red Mill Unbleached Enriched Artisan Bread flour. Bob’s is sponsoring this post in partnership with The Bakefeed (thank you!) but I would in all honesty always tell you to buy a good high quality bread flour like Bob’s Red Mill.

It makes a world of a difference!

Another great thing about this recipe is that you also do not have to do this by hand because your stand mixer is going to do all the work for you!

There are only a few things you need to know about making challah before you start.

This is what you need to know about yeast:

Let’s break it down.

The water temperature is where people tend to freak out and not know if they are killing the yeast or not.

How hot is too hot?

Think about it like this, if you can stick your finger in the water and leave it there for 5 seconds comfortably it’s good. If not, it’s too hot.

You’ll know that your yeast is alive when it starts to bubble up and foam or when your dough doubles in size.

If your dough does not rise, you have to restart with fresh yeast. There is no resurrecting dead yeast.

There’s a couple I want to point out here:

1. Use a high quality bread flour like Bob’s Red Mill. All purpose flour will 100% work but bread flour is always better for making bread.

It has a higher amount of protein than regular flour which will help the gluten form. Gluten is what gives bread it’s characteristics like elasticity and a good chewy texture.

2. We’re using active yeast in this recipe, it comes in small pre measured packets of 2 ¼ teaspoons and all you need is one!

How to make it

First measure out all your ingredients so you have them at the ready when you need them. Make sure to follow the recipe instructions because some of the ingredients need to be divided.

The challah dough requires several rise times so it will take some time. It’s worth it though!!

Start by activating the yeast in ½ cup of warm water and mixing it with 1 cup of flour in the bowl of your stand mixer. Mix with the paddle attachment until it comes together. The dough will be sticky and need to rise for a half hour.

When the dough has doubled in size add 4 more cups of flour, sugar, and salt. Whisk together the eggs, oil, honey and remaining water in a separate bowl (I like to just do this in a measuring cup) and then add it to the dough.

Switch to the dough hook on your mixer and let it knead the dough on low speed for about 5 minutes.

The dough will be slightly sticky but not overly so. If you find that it’s very sticky you can start adding in that last 1/3rd cup of flour slowly- about 1 tablespoon at a time.

Turn the dough out onto a lightly floured surface and shape it into a ball. The dough should not be overly sticking to your counter. It should be smooth and easy to move around with only a slight amount of tack to it.

Pour 2 teaspoons of oil in a large bowl and add the challah dough. Cover with a clean kitchen towel and place it in a warm place to rise for about 2 hours. It will double in size.

Turn out the dough again onto a floured surface, it will deflate a little, that’s okay! Line a baking sheet with parchment paper.

Divide the dough into 6 equal parts. Roll them into long ropes and line them up next to each other.

Group 3 strands together at the top by pinching them, then do the same for the second set of 3.

You should have 2 sets of 3 strands. Next group them all together by pinching them at the top.

Cross outer ropes over each other, with the right outer rope going over top of the left outer rope. Then bring the now outer left rope to the center and the second rope from right over to the left.

Next take the outer strand on the left (that you just brought over) and bring it to the middle. Then take the second strand from the right and bring it across to the left.

Continue going in that pattern bringing the outer strand into the middle and then crossing it with the second strand over the braid.

It will be so much easier to do and will show you that it really isn’t that complicated.

When you get to the end of the strands, cross them over as much as you can, then tuck them underneath themselves and give it one more pinch.

Place the challah on the parchment paper and leave it again in a warm place to rise one more time.

I like to turn on my oven that is under my stove top and place the challah on the stove. The residual heat is warm and will help the challah rise.

While the challah is rising, prepare the toppings.

Mix the egg with the water in a small bowl. Next, mix the cinnamon and sugar in another bowl. When the challah has risen and puffed up, brush it with the egg wash and then sprinkle with the cinnamon sugar.

The egg wash is what will give the challah it’s sheen, and the cinnamon sugar topping will make it sweet!

Bake the challah on 350 degrees Fahrenheit for 35-45 minutes. The challah should be golden brown and it will smell like heaven in your house!

I like to store challah in a paper bag to keep the texture of the crust. If you dont have that option, store in a large zip top plastic bag.

Wrap the challah really well in tin foil and then in either plastic wrap or a freezer safe bag. It will stay fresh for up to 6 months. Defrost at room temperature!

What you can do with challah

Besides for devouring it whole?

Omg so many things!

This recipe, because it is sweet, would be amazing as french toast. If you leave off the topping it would make a mean grilled cheese sandwich.

We also really like to dip it in soups, serve it with dips, or just spread some good butter on it as a snack.

We eat challah every friday night and saturday and let me tell you, WE NEVER GET SICK OF IT!

I would love to hear if you made this recipe! Please let me know what you think by leaving a rating and a review!

This post was sponsored by Bob’s Red Mill in partnership with The Bake Feed, but all opinions are my honest own! 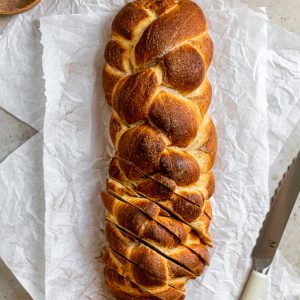 This recipe makes one large challah braid. You can divide the dough into smaller portions to make smaller challahs. Make sure to decrease the baking time if you are making them smaller!

Ahhhhhhh I’m so excited – because the LAST gro

Forever in love with this color combo! If you str

How to deal with imposter syndrome… Chances are